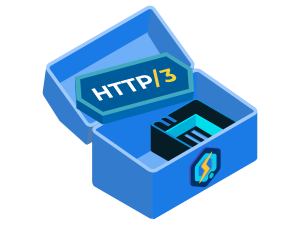 Keep your WordPress site on the cutting edge by utilizing the latest Internet technologies, like HTTP/3 and QUIC.

QUIC.cloud is the first and only CDN to support HTTP/3 connections end to end, from client browser to backend server. This innovation is made possible by LiteSpeed’s open source LSQUIC implementation.

HTTP/3 and QUIC support are included in QUIC.cloud’s CDN service at no additional cost.

What are HTTP/3 and QUIC?

HTTP/3 is the newest version of the Hypertext Transfer Protocol, formerly referred to as “HTTP over QUIC,” and is the successor to HTTP/2.

QUIC was originally a Google effort to improve HTTP/2 by transporting it encrypted over UDP. In 2016, the IETF began working to standardize the protocol. Part of that process involved splitting QUIC into the transport protocol (QUIC) and the application protocol (HTTP/3).

LiteSpeed was the first to introduce QUIC and HTTP/3 support in a production-grade web server. This tradition of innovation continues with QUIC.cloud. QUIC.cloud is the first and only CDN with a full HTTP/3 stack, capable of connecting via HTTP/3 and QUIC from client to server. LiteSpeed’s QUIC client enables connections to the origin server via HTTP/3 and QUIC. This technology allows QUIC.cloud to be extremely flexible in its ability to multiplex client requests as well as server requests. If HTTP/3 connections are not supported by either the origin server or the client, QUIC.cloud seamlessly connects via the next best supported HTTP version.

QUIC.cloud’s HTTP/3 technology provides peace of mind. Domains that are wary of opening up UDP to the world need only whitelist QUIC.cloud IPs to make it work.

Getting started with QUIC.cloud is easy!

Sign Up Here
Read the step by step guide